Christmas is a joyful time for spending the day with family, and for most people, enjoying the gifts that they received. Many video game fans could hardly contain their excitement as they unboxed their new Xbox Ones and Playstation 4s, as many days of entertainment with their friends awaited. But this year, many gamers were shocked when both Xbox Live and Playstation Network were assaulted by a cyber attack from a group of highly-skilled hackers.

Known simply as Lizard Squad, this attention-seeking team had tampered with the gaming industry several times throughout the month of December, claiming to have deleted hundreds of Steam Network accounts. This recent attack was the most threatening and the most successful.

The attack involved a Distributed Denial of Service, or DDOS, where hundreds of fake access requests are generated, thus slowing a system’s online capabilities to a crawl. An attack like this not only prevents players from joining online servers, it can prevent them from playing physical copies offline, as many new consoles require online access before a game can be played. Since the PSN server is notoriously slows–it had crashed the previous year due to a server overload– Lizard Squad was able to cover their tracks.

Lizard Squad, a mysterious group of video game hackers that refer to themselves as the “Next Generation Grinch”, communicated through a now-removed twitter account and threatened Microsoft and Sony multiple times throughout December. While the account has been removed, a second account has accumulated thousands of followers, most likely created by gamers hoping to protect their systems.

Lizard Squad’s reign of technological terror began in August, where they claimed to be responsible for crashing the Playstation Network, targeting Blizzard Entertainment’s “Battle.net”, bringing down servers for many Microsoft games such as “Destiny” and “Grand Theft Auto Five”, and even tweeting a bomb threat for a plane carrying the president of Sony.

At the time, neither Sony nor Microsoft publicly addressed the issue. Both companies refused to acknowledge the hackers, and explained that their technicians were working on “technical issues”. Understandable, as both were heavily damaged by this attack. Sony was particularly damaged, as they had already suffered a hack attack earlier in December, during which emails and company secrets were exposed.

Lizard Squad made multiple tweets throughout December, hinting at what was in store for gamers on Christmas Day, stating that Microsoft and Sony were in for “a wonderful Christmas present,” this year.

Multiple groups attempted to intervene. A rival clan of hackers, known as the Finest Squad, claimed to be attacking Lizard Squad in hopes of reversing their work. Finest Squad claimed partial responsibility for the arrest of three Lizard Squad members, including a teenager responsible for faked High School bomb threats in British Columbia, Canada. Additionally, Kim Dotcom, an “electronic entrepreneur”, offered the members of Lizard Squad free use of his cloud storage services.

While it seemed that Dotcom saved the day, this victory did not come without a price. Not only did it show members of Lizard Squad that they were able to get away with a crime– with money in their pockets no less–it has undoubtedly opened the floodgate for countless copycats attacks trying to make cash fast. This is a problem, as DDOS attacks have risen in popularity over the past year.

Lizard Squad disbanded after the arrests, and the servers quickly recovered. However, the wounds cannot completely heal. Not only did Lizard Squad’s attack reveal that their servers can be molded like electronic clay, it showed that they couldn’t do much to defend themselves. Gamers and technicians alike can only hope that this attack was the last. 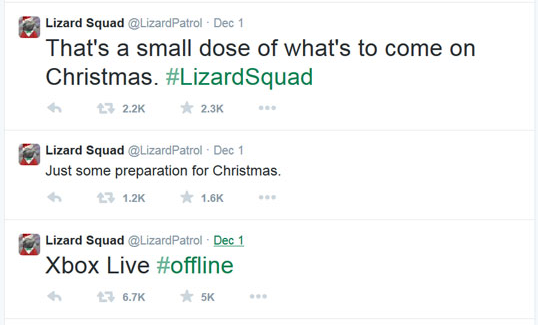 Tweets from Lizard Squad’s twitter chronicle their plans during December 2014. While the original Twitter has been deactivated, another account was created, which raked in thousands of followers, most likely gamers trying to save their systems.