HBO competes with Netflix for viewership 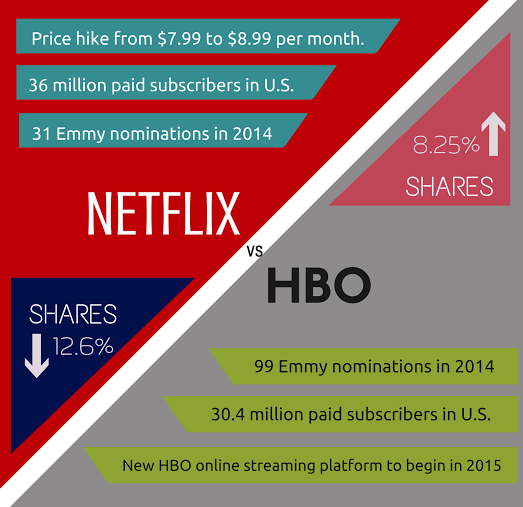 Netflix is a leader in the video streaming game for many reasons. After introducing video streaming to subscribers in 2007, the company managed to edge out the competition over the years by correcting the pitfalls of competing services. Services such as Hulu and Amazon Prime have high price points for access to their libraries, and ads air before, during, and after a program even if a subscription is purchased. Netflix possesses a cheap subscription plan and ad-less videos while offering unique original content and playback of movies without digital rights management software (software that restricts how a movie can be viewed) as added incentives for consumers.

“The main reason I stay with Netflix is their range of content,”said librarian Robin Stayvas. “Netflix has everything; I mostly watch Netflix for the documentaries, but great shows such as “The Office,” “The “Killing” and “Jericho’” keep me hooked on the service.”

The extra incentives of Netflix come with their own pitfalls: licensing issues. Netflix offers third-party hit shows, such as “The Walking Dead” and “Arrow,” but is only able to screen earlier seasons of these series. Netflix only licenses new seasons of a show months after the season aired.

In the coming years, the idea of watching TV will change. Television content providers will offer more content online, following in the footsteps of HBO. HBO owns the rights to groundbreaking series and could be the cable provider to bring in this change.