On Desensitization and Turning 18: Look Up, SPF 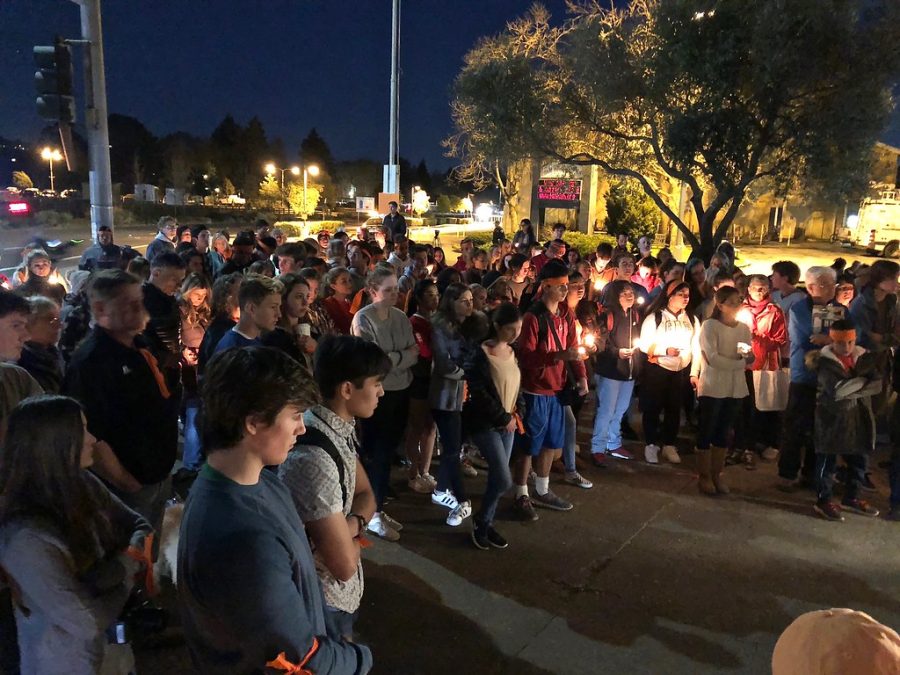 A memorial after the Parkland shooting of 2018.

I was eight years old the first time I considered where I’d hide in the classroom if a shooter came into the school building.

Before I went off to school to sit in my third-grade classroom and learn about multiplication, my mom helped me get my backpack on and told me about the Sandy Hook shooting.

I was in my purple winter coat and she said that she wanted me to hear about it from her instead of on the playground.

I remember that the classroom felt brighter that day than it usually did. The winter sun — you know the type — peaking through the blinds. I was working on my biography project about JK Rowling. I still didn’t know how to divide.

But I knew that if anything bad were to happen in school, I was the skinniest in the class and I could definitely fit inside the pink closets in the back of the room.

After Parkland, I was one of the organizers of the school walkout. Most of us weren’t yet 14 and weren’t allowed to physically walk out of the building like the high schoolers (something I wish I could address in and of itself). A few of us put together an assembly. I didn’t own orange set aside a Disney shirt. I still have it in the bottom of a drawer.

I went back to my “study hall” class and my teacher allowed me to take a 15-or-so minute walk because “what you just did was very brave.” She was my Algebra I teacher. In my middle school yearbook, she told me she “looked forward to voting for me on future ballots.” She was a strict teacher, but I saw her softness then.

I walked past some fifth-grade students, one of whom stopped me in the hallway and told me she was scared and sad. That hearing the names was hard. But that my voice made her feel safer.

I’ve missed 18 days of school — maybe more — throughout my academic career because my parents have never been the type to force me to go to school when there is a bomb threat or a shooting threat or a TikTok trend where the final day of the challenge is to bring a gun to school. I still bring my phone to the bathroom in case I have to text my parents goodbye.

On May 24, 2022, I turned 18. I’m not big on birthdays, but I woke up and immediately checked to ensure I was registered to vote. I was tired during the day, and when the news broke about what happened at Uvalde, I felt ill. That voter registration, the one I’ve waited eight years to acquire, feels futile.

I’d love to say that if you’re 18, reading this, register to vote and cast your ballot for someone who supports common-sense gun legislation. Red flag laws, universal background checks, and assault rifle bans — among other legislations — are widely supported amongst gun owners. Gun owners. As of 2015 (three years before Parkland) 83% of them supported universal background checks.

But it’s not the Senators making the calls. It’s the lobbyists who give them millions of dollars to campaign. It’s the NRA backing 50% of Senators with a minimum of $20,000. Mitt Romney of Utah took over $13.5 million in donations from the NRA in 2019. According to the Washginton Post, “Nineteen current or recent Republican senators, including Senate Minority Leader Mitch McConnell (Ky.) and Sens. Rob Portman (Ohio) and Joni Ernst (Iowa), have taken at least $1 million each in campaign contributions from the NRA over their careers.”

19 elementary school kids just died. As did two of their teachers. At the hands of an 18-year-old boy who purchased a gun days after his birthday.

This shooting, given the youth of its victims, might stay in the news cycle for a week. Our Twitter feeds might be bombarded with parents sharing stories, heartfelt messages and pleas of fear.

The Buffalo shooting was in and out of circulation in two days.

The Buffalo shooting that is now used in NPR articles to discuss food insecurity (of course, not gun violence) and the cancelation of a standardized test rather than the disproportionate impact of gun violence on black Americans.

The tragedy at the Taiwanese Church in Southern California didn’t even get that much coverage.

Perhaps what’s most horrifying about what occurred at Uvalde is that only a handful of students in my AP Lit class participated in the discussion about our anxieties when our teacher opened it up.

It’s been ten years since Sandy Hook. Four since Parkland. Ten days since people were massacred in a grocery store and yet, seniors on the precipice of their voting rights still scroll mindlessly on TikTok. They refuse to read the news out of fear it’s “depressing,” and they refuse to call their school out on its vagueness with regard to its “strict safety protocols.”

To you reading this: look up. It feels impossible — futile, as I said — to do anything or change anything. But if you have no clue what needs changing, how are we going to get anywhere? Hold your legislatures, and your school for that matter, accountable for their actions (and lack thereof). Instead of panicking about final exams, for two minutes consider the thousands of people who die from gun-related injuries and violence per year. Consider the families that they leave behind. Consider that if we just did something, perhaps we wouldn’t be here with 19 elementary school kids absent on May 25.