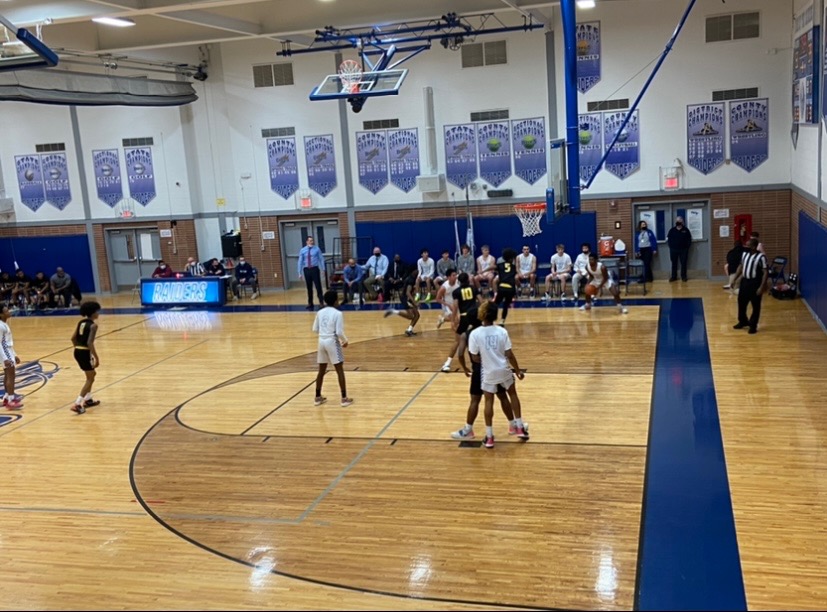 The boys basketball team didn’t fret last night achieving a bounce-back victory after its one-point loss to Oratory Prep one game ago.

Junior Matt Nervi led the Raiders with 18 points, 5 rebounds, and 3 steals, while senior Jaden Carter added 10 points to their 65-51 victory over Sinai Christian on Tuesday, Feb. 15. in the first round of the Union County Tournament.

“It was a hard-fought game, we knew that our opponent was very tough, and we had to bring our A-game,” Coach Steve Siracusa said. “I’m just glad that we buckled down on defense and made some big stops throughout the game, which allowed us to get more offensive transitions, and control the pace of the game.”

SPF was able to maintain a 10-point lead throughout the contest, locking down on defense and preventing big runs from Sinai Christian.

“We stress taking care of the basketball, rebounding, and just playing great defense,” Siracusa said. “We just had to control the pace a little bit more and just take out time and be smart with the ball.”

Rebounding, taking care of the basketball and playing great defense are the keys for SPF’s next game: a part three rematch with Oratory Prep. While the Raiders were sloppy with the ball in the first game, blew a seven-point lead in the final minutes of the second game, this final rematch is something that these players circled when the UCT seeding came out.

“We thought we should have won the game, so we just want to carry over all the good things we did well in the second match to the game on Thursday,” Junior Matt Nervi said. “We also need to improve on the stuff that we didn’t do that well, like taking care of the ball at the end of the game.”

SPF’s desire for a win this Thursday means more to the team now than it has throughout the first two matches.

“We’re going to go out there and give it our all because it’s counties, and for our seniors, it could be their last county game, so we want to do well for them,” Nervi said.

Coach Siracusa stressed the fact that a win against Oratory won’t only be beneficial for the team as a whole, but losing three times to any team in a season is never satisfactory.

“Any time we can play a team three times and get another shot at them, we’re going to be excited and hungry, and they’re a very talented team,” Siracusa said. “We have to be ready to play, to improve and keep showing what we’re made of.