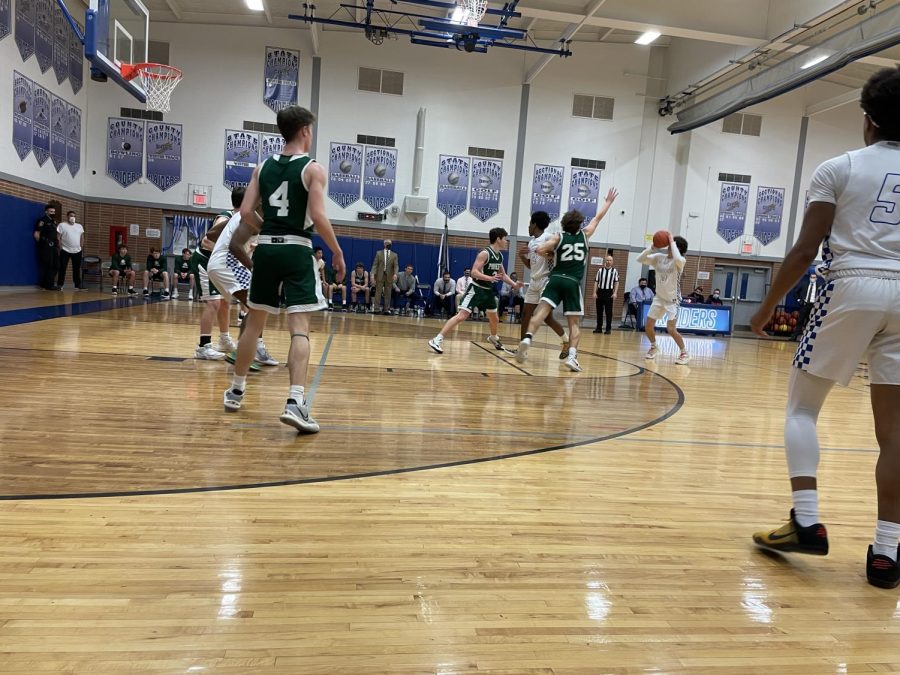 Through three quarters, the boys varsity basketball team played like a team that has had three games in four nights: exhausted.

They were cold from the field, sloppy with the ball and looked like they were going to lose to the New Providence Pioneers (6-13) — who SPF beat on Jan. 20 62-44 — on senior night.

Then, the fourth quarter happened.

Senior guard Russ StaRosa hit back to back threes; junior guard Matt Nervi exploded for 11 points including a sweet four-point play with 1:27 remaining; SPF hit its free throws, as the Raiders outscored the Pioneers 14-11 in the final two minutes to secure a 55-54 thrilling victory in front of Raider Nation to bring its record to 10-5 and win streak to four.

“It’s been a grind lately, especially the third game this week and we knew New Providence wasn’t going to be an easy game for us,” head coach Steve Siracusa said. “I’m just proud of our guys for finding ways to win and gutting it out.”

“My two threes were important, it feels really good especially on senior night, and it got the energy back up in the game,” StaRosa said. “This is a huge game, we’re 10-5 now, we’re back on a streak and now we’re not worried about this game anymore. We’re moving on to Oratory.”

While the Raiders do not like to make it easy on their fans, they found a way to win the game when needed. It’s a character-defining win for SPF who trailed by five with 4:23 left, scoring 21 points in the final four minutes — more than their total points scored in the second and third quarters combined.

“We had a lot of time left in the game and the only way we’re going to get back in this game is by getting stops and taking quality shots,” Siracusa said when asked about what he told the team down the stretch. “Every possession was very important and instead of focusing on the long term and the score, just focusing on one possession at a time whether it’s defense or offense and just slowly chipping away. We knew there was a lot of game left and it went down to the wire to the last 0.8 seconds.”

The Raiders also bounced back from its 55 percent free-throw shooting night against Hillside on Tuesday that nearly cost them the game, converting 70 percent from the line Thursday — a number that could still use a bump as the Raiders head towards the postseason and beyond.

“We talk about not just physically practicing it but also mentally believing in making a free throw,” Siracusa said. “We obviously worked a lot on free throws yesterday but also just believing in yourself that you’ve been doing this hundreds of times and it’s just another free throw whether there’s a ton of fans or no one in the gym.”

Though senior guard Jaden Carter had a difficult night shooting the ball, he converted two key free throws late in the game to cut the Pioneers lead to two. The senior guard was crucial in the effort down the stretch.

“We shot 25 [free throws] at practice and we came prepared,” Carter said. “Today they came in at an important moment. I was kind of down with my shots not going in, but I just had to focus and put the team first, so that’s what I did and we came out with the dub.”

Nervi led the team with 17 points and when describing his four-point play, he kept it brief.

“We just wanted to do it for the seniors on senior night and it got a little stressful — it should have never got to that, but it was a good win and I’m happy for my senior brothers,” Nervi said. “Jaden found me, I shot it, I made it, I got fouled and the rest is history.”

And with that, the Raiders ride into Saturday’s rematch at home against Oratory with momentum and a chance to avenge their 65-48 loss on Feb. 1.