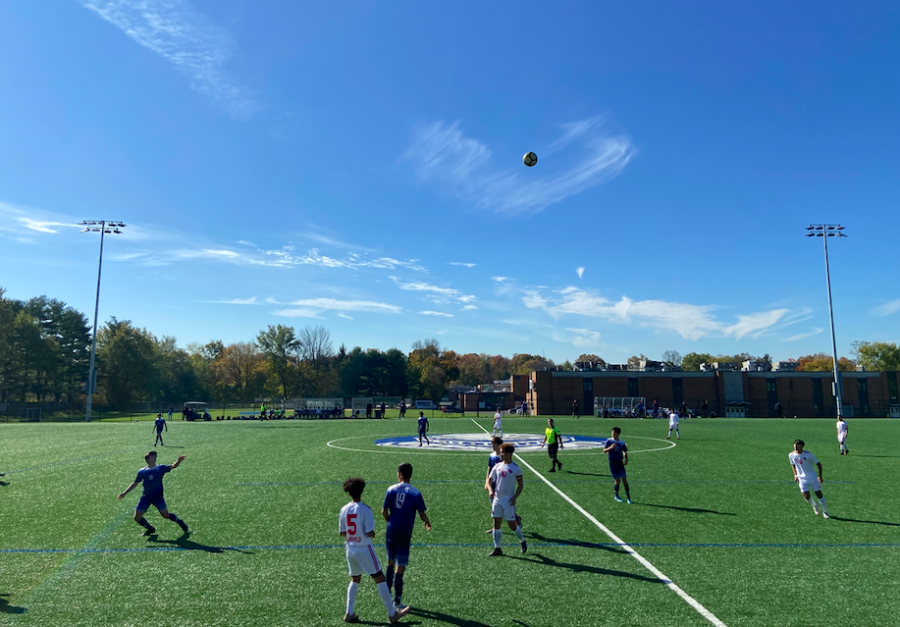 Despite setbacks due to Covid-19 and a rough start to the season, Raiders boys soccer is back.
After a commanding 8-0 win against Plainfield on Thursday, Nov. 5, the Raiders are advancing to the Union County semi-finals to face Elizabeth on Saturday, Nov. 7.
The win against Plainfield was a breath of fresh air for the fans and the team after setbacks due to the virus and a string of tough results casted doubt about the quality of this team.
“It feels great, I’m happy for the boys,” head coach Alex Passuci said. “It was a great effort. I think they were very good on both sides of the ball, everything we talked about and worked on during our training sessions. I think today they came out and did a great job.”
Spectators, although limited, watched as junior Ethan Koseoglu scored the first goal less than 10 minutes into the game. Sophomore Calum Murray was watching from the bench with his team and described the unmatchable feeling of watching the ball go into the net.
“Everybody on the bench just jumped up,” Murray said. “We were like it [a win] is going to happen today.”
Passucci and the entire team felt the energy from the first goal and followed with seven more unanswered. The Raiders used the first goal as momentum and prevented Plainfield from ever having a chance. This was an important win for the Raiders who tied Plainfield less than one week ago.
“I mean, it’s nice to get the first one [goal], it takes the edge off, but I didn’t think it was going to be enough,” Passucci said. “The first thing that goes through my mind is that we need to continue what we were doing to get the first one.”
With a minute remaining in the first half, Murray assisted senior Matt Dembiac in the first of his three goals. In the second half, Murray scored a goal, which was assisted by junior Nkem Okorie.
This year marks Murray’s first year on the boy’s varsity soccer team, and today he proved why he deserves a prominent role down the stretch.
“If we were able to get to the final that would be amazing for my first year,” Murray said.
The Raiders will face Elizabeth on Saturday, Nov. 7 at Arthur L. Johnson High School in Clark. The Raiders have not beaten Elizabeth since the 2016-2017 season; the Minutemen are in many ways the Raiders’ kryptonite. As the team looks ahead to Saturday’s game, they must use this victory as momentum for the game against Elizabeth. The season is certainly not over, and the road behind the boys soccer team is an inspiring one.
“At the start it was a bit rough,” Murray said. “We came off of two losses and after that we began pushing and getting better and better. Today everything just went right and we’re excited to play in the semifinals now.”
Although seating for the semifinals will also have to be limited due to rules in place to protect both spectators and the teams, the game is shaping up to be a classic..
“You know, hopefully we get some support to come out. I hope people enjoy watching us play,” Passucci said. “I know fans [spectators] are limited right now, but we hope that when we step on the field the fans, administrators and the community enjoy watching us play.”