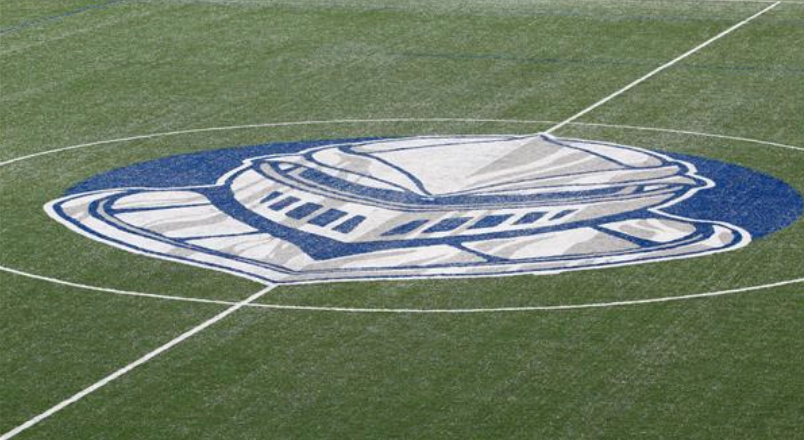 A new chapter began for Scotch Plains-Fanwood High School soccer on Saturday, Sept. 26, as former coach Tom Brezinitsky did not occupy the sidelines for the first time in 47 years.
Instead, Coach Alex Passucci, who was formerly a star for SPFHS under Breznitsky, began his tenure as head coach with a decisive 4-1 win over New Brunswick.
While it was only one scrimmage versus a pedestrian opponent, the Raiders showed two key qualities for success: great defensive discipline and a killer attack, which was missing last season. Juniors Nkem Okorie and Ethan Koseoglu combined upfront with sophomore winger Dylan Fei, who has game-breaking speed, to stretch the field for the Raiders.
“Dylan is a dynamic player, and we really like him out wide at that number seven spot,” Passucci said. “He’s young and inexperienced, but he’s coming to our training sessions with a good mentality. He’s been working hard and he earned his spot.”
The midfield featured senior captain Eric Watt and juniors Thomas Rodriguez and Jason Trivisano. Rodriguez, a critical piece for the Raiders, returned after not playing for the varsity team last season. Passucci played Rodriguez as an attacking center midfielder after he played almost exclusively as a striker during his freshman year under Breznitsky. Rodriguez’s composure on the ball and speed makes him the ideal box-to-box center midfielder in a 4-3-3 system.
“Right now we feel like what’s best for the team is playing him in the middle of the field,” Passucci said. “I’m not sure if we will continue to do that or not, but at the moment, that’s where we feel he fits best for us.”
The Raiders first goal came in the 11th minute off a free kick 25 yards out by all-state first team defender Joey Linder, which was headed across the goalmouth by Fei and finished by Koseoglu.
After the first goal, the Raiders took control of the game, dominating possession and overwhelming the New Brunswick defenders. The Raiders employed a high-pressing system that dared New Brunswick to play the ball over the top, but they had little success against the solid center back duo of Linder and Nick Tittanegro.
The departure of Danny Coyle has left questions about who would be the Raiders starting goalkeeper. Freshman goalie Graham Kois started at goalie for the Raiders playing approximately 65 minutes until being subbed out.   That said, it will be interesting to see if Kois remains the starting goalkeeper when senior Sean Kennedy, who was absent at the game, returns for the Oct. 1 scrimmage at Plainfield.
“It’s quite a daunting experience,” Kois said. “I trained with him [Coyle] quite a few times. He’s a really nice guy, and above all else, he was a great goalie. So it is quite a legacy to follow up but I think we’ll do our best throughout the season to focus on ourselves.”
Storylines to follow going forward include junior speedster Noah Sadler’s role in Passucci’s system, as he drew a penalty kick in the second half and provided great juice to the second-string attack. If Sadler continues to play with that energy, he will suddenly make Passucci’s personnel decisions that much tougher.
“It hasn’t been easy for me, for us, the coaching staff to pick a starting lineup,” Passucci said. “The guys have really made it difficult for us, but I guess that’s a good problem to have.”
While this is only one scrimmage, the Raiders look the part: a well-coached team with smart, deft players positioned in all three areas of the pitch.
“It is surreal,” Passucci said when asked about taking over for his former coach. “Brez was here for 47 years, and you have mixed feelings. I’m very excited, obviously. And at the same time, you still feel that he’s part of this program. We’ll do our very best to put our heart and soul into the program to try to keep this going.”