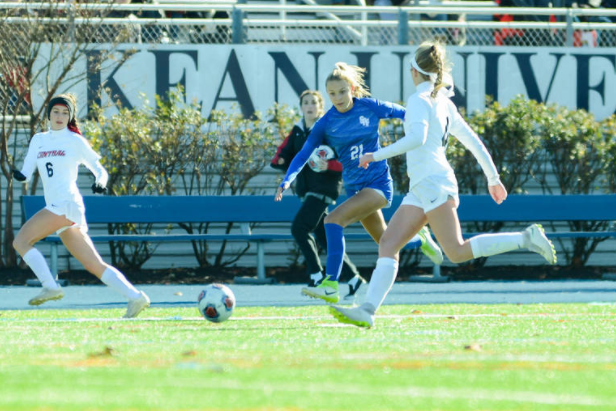 Though the Raiders’ (18-3-2) first ever appearance in the state Group 4 final did not end in victory, throughout the season the team showed what it takes to become a championship contender.
The 4-0 loss to Hunterdon Central on Saturday Nov. 16 fails to tell the story of the game where the Raiders’ were one play away from changing the whole game. If anything the loss can provide a learning experience for the Raiders’ who reached great success in the state tournament for the first since 2014.
“After the game I told the girls to keep their heads up,” head coach Kevin Ewing said. “The one takeaway for them was that in life adversity happens and it is how you step up when faced with adversity and look to move forward.”
While the Raiders season ends with the departure of 12 seniors, core players like junior Corinne Lyght and sophomore Leah Klurman will return to provide the Raiders with a chance to win despite the opponent.
Among Klurman and Lyght, junior Holly Nelson, sophomore Alexa Fazio and freshman Gia Milano all contributed this season and are likely to become more important to the Raider attack with seniors Lizzy Ley, Rachel Schoss and Brooke Klurman all graduating.
The Raiders should have great confidence entering next season; the team’s accomplishments show they have what it takes to be the best.
“One game does not define a season,” Ewing said. “The girls have a lot to be proud of in winning the Union County Conference Watchung Division and the North 2 Group 4 Sectional Title and then reaching the Group 4 final for the first time for the Girls Program in school history.”