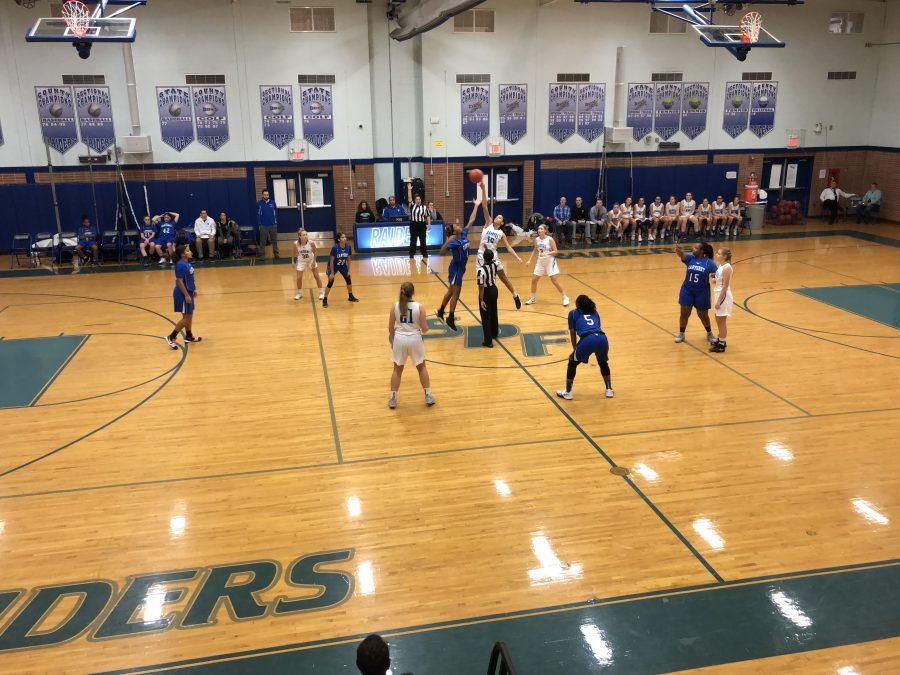 On Dec. 17th, 2018, the Scotch Plains-Fanwood High School Raiders faced off in their home opening game, defeating the Carteret Ramblers 52-44. Coming off of a loss to Cranford, the win instilled confidence in the young team for a strong season.
The first quarter started off with a lot of great defense. The Raiders were able to score 16 points and give up only 10, once again giving the team confidence to start the second quarter strong.
Although they played demanding first quarter, the Raiders didn’t let that stop them from dominating. With crucial rebounds from senior Hannah Lyman, sophomore Corinne Lyght and freshman Leah Klurman, the home team was able to maintain their lead with a score of 26-22.
Even though the Raiders had been dominating, Carteret made some impressive threes and important foul shots to slowly make their way to the lead, tying the game at 34 with just 30 seconds left in the third quarter.
Fans were at the edge of their seats for most of the fourth quarter. Carteret scored one foul shot to make the score 34-35, the Ramblers’ first lead of the game with seven minutes left. From then, the lead changed constantly, and it seemed like anybody’s game.
Finally, with just 38 seconds left, Klurman made two foul shots to make the score 44-48, the Raiders keeping the lead until the end of the game, finishing with 52 points over Carteret’s 44. Senior Stefanie DeVizio finished the game with 16 points, Klurman with 12 and Lyght with 19 points and 10 rebounds, her first double double of the season.
Coach Ryan McKenna was very happy with the outcome of the game.
“We rebounded very well. With a young team being so inexperienced, every game they just get a little more comfortable and little more confident,” McKenna said.
However, he still believes that there is still much to be improved, as the season has just only begun.
“I think we can improve on our defense,” McKenna said. “We gave up 40 plus points, a lot of three point shots, and I think we can be more confident offensively and more in tune with each other.”
SPFHS plays Plainfield on Thursday, Dec. 20 at 4 pm at home. Make sure to wear white and support the Raiders to another win!